C Loops: For, While, Do While, Break, Continue with Example

C Loops: For, While, Do While, Break, Continue with Example

Depending upon the position of a control statement in a program, a loop is classified into two types:

In an entry controlled loop, a condition is checked before executing the body of a loop. It is also called as a pre-checking loop.

In an exit controlled loop, a condition is checked after executing the body of a loop. It is also called as a post-checking loop.

1. No termination condition is specified.

The specified condition determines whether to execute the loop body or not.

In while loop, if the condition is not true, then the body of a loop will not be executed, not even once. It is different in do while loop which we will see shortly.

Following program illustrates a while loop: 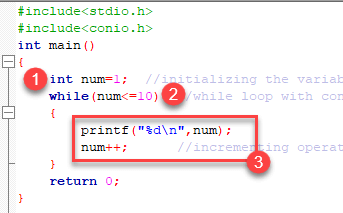 \n is used for formatting purposes which means the value will be printed on a new line.

A do-while loop is similar to the while loop except that the condition is always executed after the body of a loop. It is also called an exit-controlled loop.

The basic format of while loop is as follows:

Similar to the while loop, once the control goes out of the loop the statements which are immediately after the loop is executed.

The following program illustrates the working of a do-while loop:

We are going to print a table of number 2 using do while loop.

In the above example, we have printed multiplication table of 2 using a do-while loop. Let’s see how the program was able to print the series. 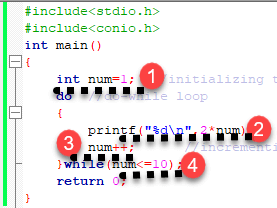 Following program illustrates the use of a simple for loop:

The above program prints the number series from 1-10 using for loop. 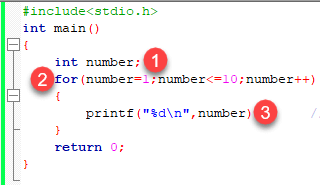 In C, the for loop can have multiple expressions separated by commas in each part.

Also, we can skip the initial value expression, condition and/or increment by adding a semicolon.

Notice that loops can also be nested where there is an outer loop and an inner loop. For each iteration of the outer loop, the inner loop repeats its entire cycle.

Consider the following example, that uses nested for loops output a multiplication table:

The nesting of for loops can be done up-to any level. The nested loops should be adequately indented to make code readable. In some versions of ‘C,’ the nesting is limited up to 15 loops, but some provide more.

The nested loops are mostly used in array applications which we will see in further tutorials.

The break statement is used mainly in in the switch statement. It is also useful for immediately stopping a loop.

We consider the following program which introduces a break to exit a while loop:

When you want to skip to the next iteration but remain in the loop, you should use the continue statement.

So, the value 5 is skipped.

Which loop to Select?

Selection of a loop is always a tough task for a programmer, to select a loop do the following steps: