What is Concurrency Control?

Concurrency control is the procedure in DBMS for managing simultaneous operations without conflicting with each another. Concurrent access is quite easy if all users are just reading data. There is no way they can interfere with one another. Though for any practical database, would have a mix of reading and WRITE operations and hence the concurrency is a challenge.

Concurrency control is used to address such conflicts which mostly occur with a multi-user system. It helps you to make sure that database transactions are performed concurrently without violating the data integrity of respective databases.

Therefore, concurrency control is a most important element for the proper functioning of a system where two or multiple database transactions that require access to the same data, are executed simultaneously.

Here, are some issues which you will likely to face while using the Concurrency Control method:

Why use Concurrency method?

Assume that two people who go to electronic kiosks at the same time to buy a movie ticket for the same movie and the same show time.

A lock is a data variable which is associated with a data item. This lock signifies that operations that can be performed on the data item. Locks help synchronize access to the database items by concurrent transactions.

All lock requests are made to the concurrency-control manager. Transactions proceed only once the lock request is granted.

Binary Locks: A Binary lock on a data item can either locked or unlocked states.

Shared/exclusive: This type of locking mechanism separates the locks based on their uses. If a lock is acquired on a data item to perform a write operation, it is called an exclusive lock.

A shared lock is also called a Read-only lock. With the shared lock, the data item can be shared between transactions. This is because you will never have permission to update data on the data item.

For example, consider a case where two transactions are reading the account balance of a person. The database will let them read by placing a shared lock. However, if another transaction wants to update that account’s balance, shared lock prevent it until the reading process is over.

With the Exclusive Lock, a data item can be read as well as written. This is exclusive and can’t be held concurrently on the same data item. X-lock is requested using lock-x instruction. Transactions may unlock the data item after finishing the ‘write’ operation.

For example, when a transaction needs to update the account balance of a person. You can allows this transaction by placing X lock on it. Therefore, when the second transaction wants to read or write, exclusive lock prevent this operation.

This type of lock-based protocols allows transactions to obtain a lock on every object before beginning operation. Transactions may unlock the data item after finishing the ‘write’ operation.

Pre-claiming lock protocol helps to evaluate operations and create a list of required data items which are needed to initiate an execution process. In the situation when all locks are granted, the transaction executes. After that, all locks release when all of its operations are over.

Starvation is the situation when a transaction needs to wait for an indefinite period to acquire a lock.

Following are the reasons for Starvation:

Two-Phase locking protocol which is also known as a 2PL protocol. It is also called P2L. In this type of locking protocol, the transaction should acquire a lock after it releases one of its locks.

This locking protocol divides the execution phase of a transaction into three different parts. 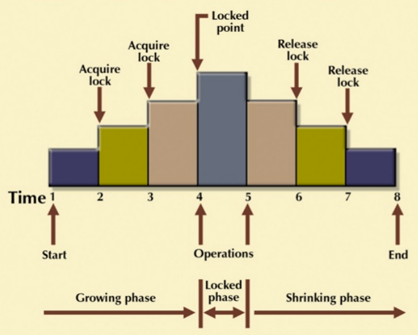 The Two-Phase Locking protocol allows each transaction to make a lock or unlock request in two steps:

It is true that the 2PL protocol offers serializability. However, it does not ensure that deadlocks do not happen.

In the above-given diagram, you can see that local and global deadlock detectors are searching for deadlocks and solve them with resuming transactions to their initial states.

Strict-Two phase locking system is almost similar to 2PL. The only difference is that Strict-2PL never releases a lock after using it. It holds all the locks until the commit point and releases all the locks at one go when the process is over.

In Centralized 2 PL, a single site is responsible for lock management process. It has only one lock manager for the entire DBMS.

Primary copy 2PL mechanism, many lock managers are distributed to different sites. After that, a particular lock manager is responsible for managing the lock for a set of data items. When the primary copy has been updated, the change is propagated to the slaves.

In this kind of two-phase locking mechanism, Lock managers are distributed to all sites. They are responsible for managing locks for data at that site. If no data is replicated, it is equivalent to primary copy 2PL. Communication costs of Distributed 2PL are quite higher than primary copy 2PL

The timestamp-based algorithm uses a timestamp to serialize the execution of concurrent transactions. This protocol ensures that every conflicting read and write operations are executed in timestamp order. The protocol uses the System Time or Logical Count as a Timestamp.

The older transaction is always given priority in this method. It uses system time to determine the time stamp of the transaction. This is the most commonly used concurrency protocol.

Lock-based protocols help you to manage the order between the conflicting transactions when they will execute. Timestamp-based protocols manage conflicts as soon as an operation is created.

An ideal concurrency control DBMS mechanism has the following objectives: