Before we learn Django, let’s understand:

What is a Web Framework?

A web framework is a code library which helps you to build a flexible, scalable, and maintainable; dynamic website, web app, and web services. Different web frameworks are Zend for PHP, Ruby on Rails for Ruby, etc.

Django is a web development framework for Python which offers a standard method for fast and effective website development. It helps you to assists in building and maintaining quality web applications. It enables you to make the development process smooth and time-saving.

It is a high-level web framework which allows performing rapid development. The primary goal of this web framework is to create complex database-driven websites. 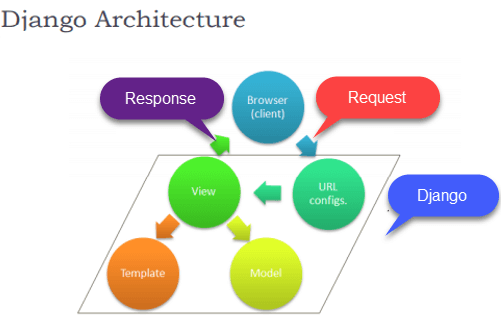 When talking about applications which provide UI (web or desktop), we usually talk about MVC architecture. MVC pattern is based on Model, View, and Controller.

The Model defines the data structure and takes to care for querying the database.

The View defines what data should be presented and returns an HTTP response.

The Controller is that part of the application that handles the user interaction.

The Model-View-Template (MVT) is a different concept compared to MVC. The main difference between these two architectural patterns is that Django itself manages the Controller part (software code that controls the interactions between the Model and View). The template is an HTML file which mixed with Django Template Language file which also called DTL.

The below-given diagram shows how all the components of the MVT pattern interact with each other to serve specific to a user request.

As seen in above diagram, a user requests for a resource to Django. Django acts as a controller and checks to the available resource in URL.

If URL maps, a view is called which interacts with model and template. Django then responds to the user and sends a template as a response.

Django has a powerful form library which handles rendering forms as HTML. The library helps in validating submitted data and converting it to Python types.

It reads metadata in your models to provide a robust interface which can be used to manage content on your site.

Here, are companies which are using Django: