File Management becomes easy if you know the right commands.

Sometimes, commands are also referred as “programs” since whenever you run a command, it’s the corresponding program code, written for the command, which is being executed.

If you want to see the list of files on your UNIX or Linux system, use the ‘ls’ command.

It shows the files /directories in your current directory.

Suppose, your “Music” folder has following sub-directories and files.

NOTE: The command is case-sensitive. If you enter, “ls – r” you will get an error.

‘ls -al’ gives detailed information of the files. The command provides information in a columnar format. The columns contain the following information:

Hidden items in UNIX/Linux begin with –

at the start, of the file or directory.

Any Directory/file starting with a ‘.’ will not be seen unless you request for it.  To view hidden files, use the command.

The ‘cat’ command is used to display text files. It can also be used for copying, combining and creating new text files.  Let’s see how it works.

To create a new file, use the command

To view a file, use the command –

The syntax to combine 2 files is –

As soon as you insert this command and hit enter, the files are concatenated, but you do not see a result. This is because Bash Shell (Terminal) is silent type.  It will never give you a confirmation message like “OK” or “Command Successfully Executed”. It will only show a message when something goes wrong or when an error has occurred.

To view the new combo file “sample” use the command

Note: Only text files can be displayed and combined using this command.

The ‘rm’ command removes files from the system without confirmation.

To remove a file use syntax –

To move a file, use the command.

Suppose we want to move the file “sample2” to location /home/guru99/Documents. Executing the command

mv command needs super user permission. Currently, we are executing the command as a standard user. Hence we get the above error. To overcome the error use command.

Sudo program allows regular users to run programs with the security privileges of the superuser or root.

Sudo command will ask for password authentication. Though, you do not need to know the root password. You can supply your own password. After authentication, the system will invoke the requested command.

Sudo maintains a log of each command run. System administrators can trackback the person responsible for undesirable changes in the system.

NOTE: By default, the password you entered for sudo is retained for 15 minutes per terminal. This eliminates the need of entering the password time and again.

You only need root/sudo privileges, only if the command involves files or directories not owned by the user or group running the commands 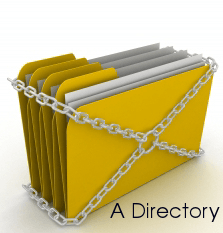 This command will create a subdirectory in your present working directory, which is usually your “Home Directory”.

If you want to create a directory in a different location other than ‘Home directory’, you could use the following command –

will create a directory ‘Music’ under ‘/tmp’ directory

You can also create more than one directory at a time.

To remove a directory, use the command –

will delete the directory mydirectory

Tip: Ensure that there is no file / sub-directory under the directory that you want to delete. Delete the files/sub-directory first before deleting the parent directory.

The ‘mv’ (move) command (covered earlier) can also be used for renaming directories. Use the below-given format:

Let us try it:

Man stands for manual which is a reference book of a Linux operating system. It is similar to HELP file found in popular software.

To get help on any command that you do not understand, you can type

The terminal would open the manual page for that command.

For an example, if we type man man and hit enter; terminal would give us information on man command 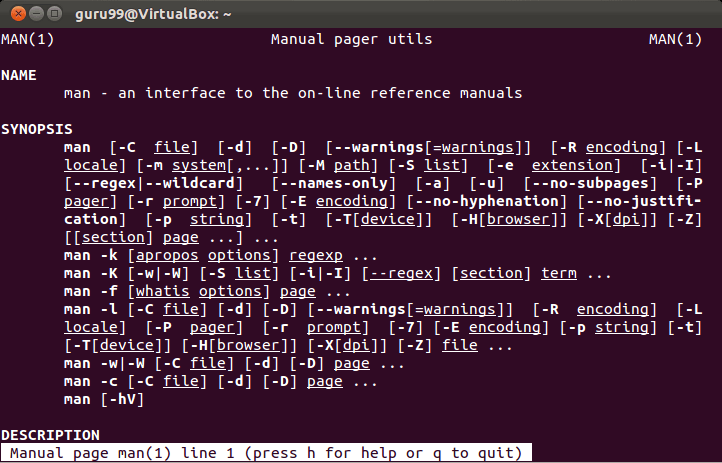 History command shows all the commands that you have used in the past for the current terminal session. This can help you refer to the old commands you have entered and re-used them in your operations again. 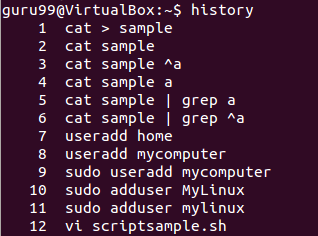 This command clears all the clutter on the terminal and gives you a clean window to work on, just like when you launch the terminal. 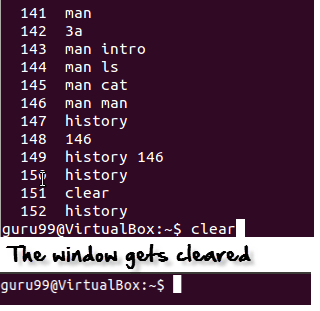 Pasting commands into the terminal

Many times you would have to type in long commands on the Terminal. Well, it can be annoying at times, and if you want to avoid such a situation then copy, pasting the commands can come to rescue.

For copying, the text from a source, you would use Ctrl + c, but for pasting it on the Terminal, you need to use Ctrl + Shift + p. You can also try Shift + Insert or select Edit>Paste on the menu

NOTE: With Linux upgrades, these shortcuts keep changing. You can set your preferred shortcuts via Terminal> Edit> Keyboard Shortcuts. 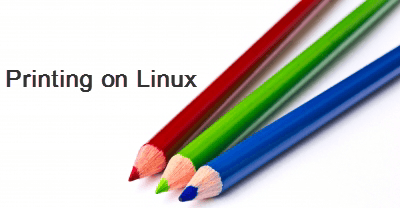 Let’s try out some easy commands which can print files in a format you want. What more, your original file does not get affected at all by the formatting that you do. Let us learn about these commands and their use.

This command helps in formatting the file for printing on the terminal. There are many options available with this command which help in making desired format changes on file. The most used ‘pr’ options are listed below.

Let us try some of the options and study their effects. 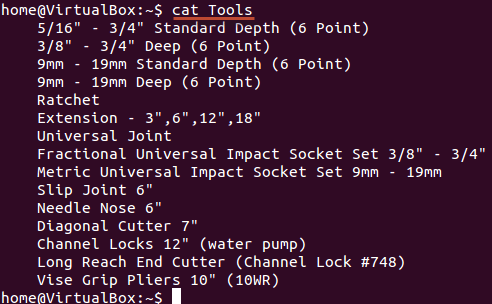 We want its content to be arranged in three columns. The syntax for the same would be:

The ‘-x’ option with the ‘pr’ command divides the data into x columns.

The ‘-h’ options assigns “header” value as the report header.

As shown above, we have arranged the file in 3 columns and assigned a header

Denoting all lines with numbers

This command denotes all the lines in the file with numbers.

These are some of the ‘pr’ command options that you can use to modify the file format.

Once you are done with the formatting, and it is time for you to get a hard copy of the file, you need to use the following command:

In case you want to print multiple copies of the file, you can use the number modifier.

In case you have multiple printers configured, you can specify a particular printer using the Printer modifier 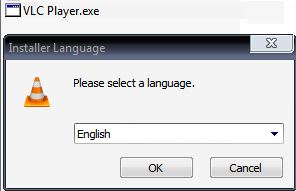 In Linux/UNIX, installation files are distributed as packages. But the package contains only the program itself. Any dependent components will have to be installed separately which are usually available as packages themselves.

You can use the apt commands to install or remove a package. Let’s update all the installed packages in our system using command – 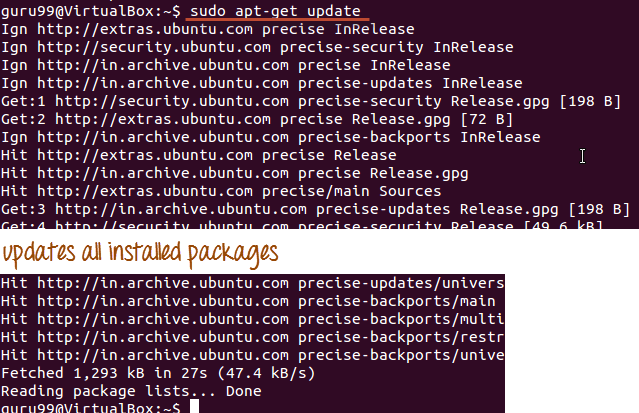 The easy and popular way to install programs on Ubuntu is by using the Software center as most of the software packages are available on it and it is far more secure than the files downloaded from the internet. 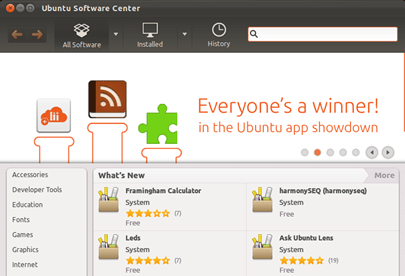 For sending mails through a terminal, you will need to install packages ‘mailutils’.

The command syntax is –

Once done, you can then use the following syntax for sending an email.

Press Cntrl+D you are finished writing the mail. The mail will be sent to the mentioned address.