1) By executing a simple SQL query

As SQL beginner , let’s look into the query method first.

CREATE DATABASE is the SQL command for creating a database.

Imagine you need to create a database with name “movies”. You can do it by executing following SQL command.

Note: you can also use the command CREATE SCHEMA instead of CREATE DATABASE

When IF NOT EXISTS is used database is created only if given name does not conflict with an existing database’s name. Without the use of IF NOT EXISTS MySQL throws an error.

Collation is set of rules used in comparison. Many people use MySQL to store data other than English. Data is stored in MySQL using a specific character set. The character set can be defined at different levels viz, server , database , table and columns.

You need to select the rules of collation which in turn depend on the character set chosen.

For instance, the Latin1 character set uses the latin1_swedish_ci collation which is the Swedish case insensitive order.

The best practice while using local languages like Arabic , Chinese etc is to select Unicode (utf-8) character set which has several collations or just stick to default collation utf8-general-ci.

You can see list of existing databases by running following SQL command. 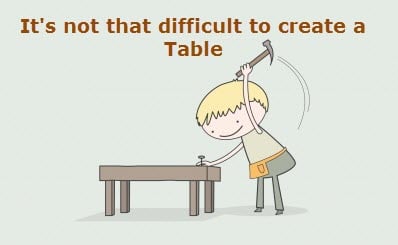 Tables can be created using CREATE TABLE statement and it actually has the following syntax.

Now let’s see what the MySQL’s data types are. You can use any of them depending on your need. You should always try to not to underestimate or overestimate potential range of data when creating a database.

As data type category name implies these are used to store text values. Always make sure you length of your textual data do not exceed maximum lengths.

Apart from above there are some other data types in MySQL.

Now let’s see a sample SQL query for creating a table which has data of all data types. Study it and identify how each data type is defined.

MySQL workbench has utilities that support forward engineering. Forward engineering is a technical term is to describe the process of translating a logical model into a physical implement automatically.

We created an ER diagram on our ER modeling tutorial. We will now use that ER model to generate the SQL scripts that will create our database.

1.       Open the ER model of MyFlix database that you created in earlier tutorial. 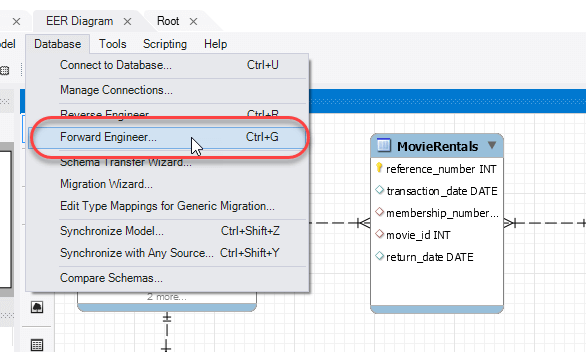 3.       The next window,  allows you to connect to an instance of MySQL server. Click on the stored connection drop down list and select local host. Click Execute

4.       Select the options shown below in the wizard that appears. Click next 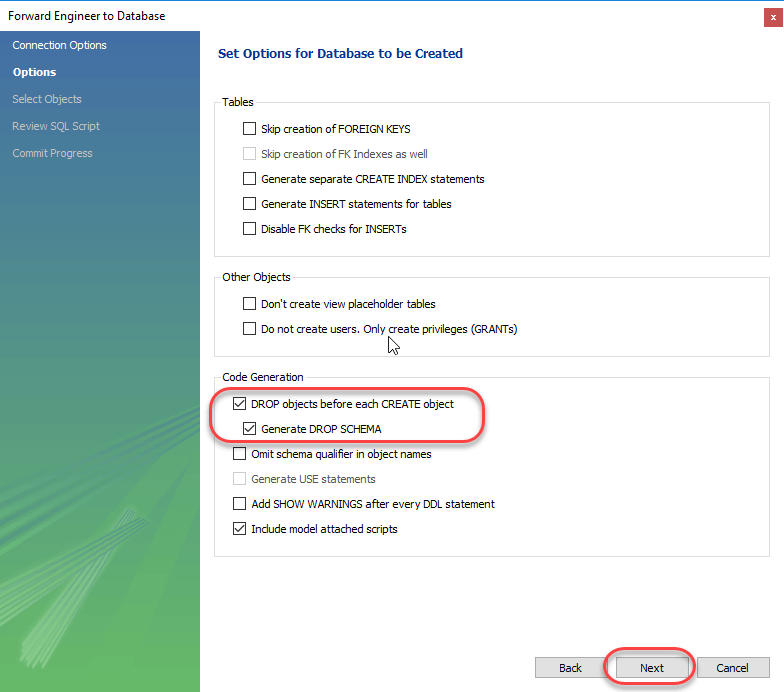 5.       The next screen shows the summary of objects in our EER diagram. Our MyFlix DB has 5 tables.  Keep the selections default and click Next. 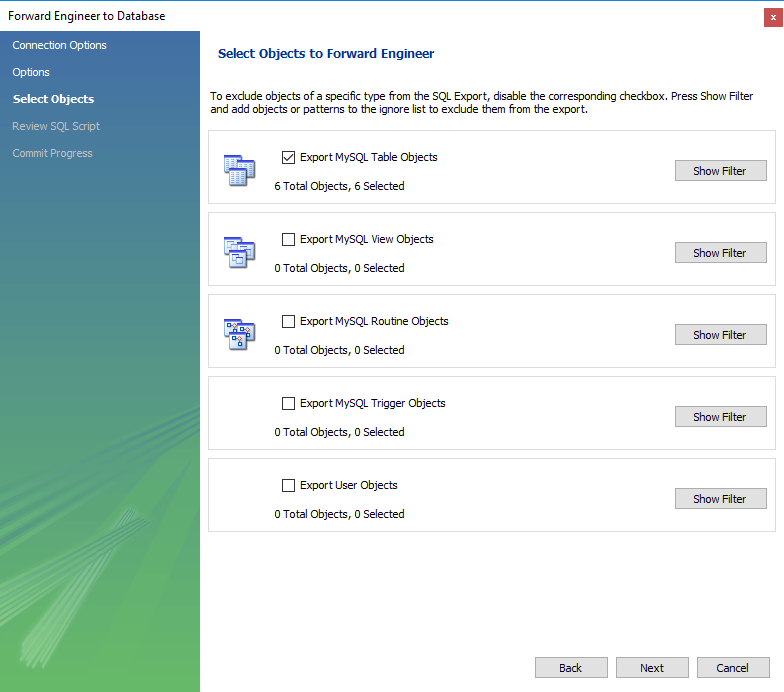 6..       The window shown below appears. This window allows you to preview the SQL script to create our database. We can save the scripts to a *.sql” file or copy the scripts to the clipboard. Click on next button 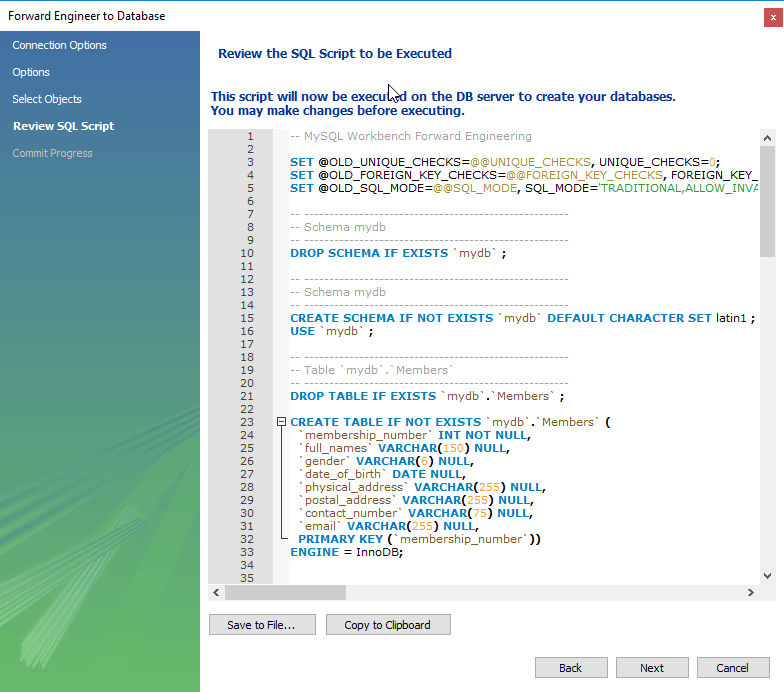 7. The window shown below appears after successfully creating the database on the selected MySQL server instance. 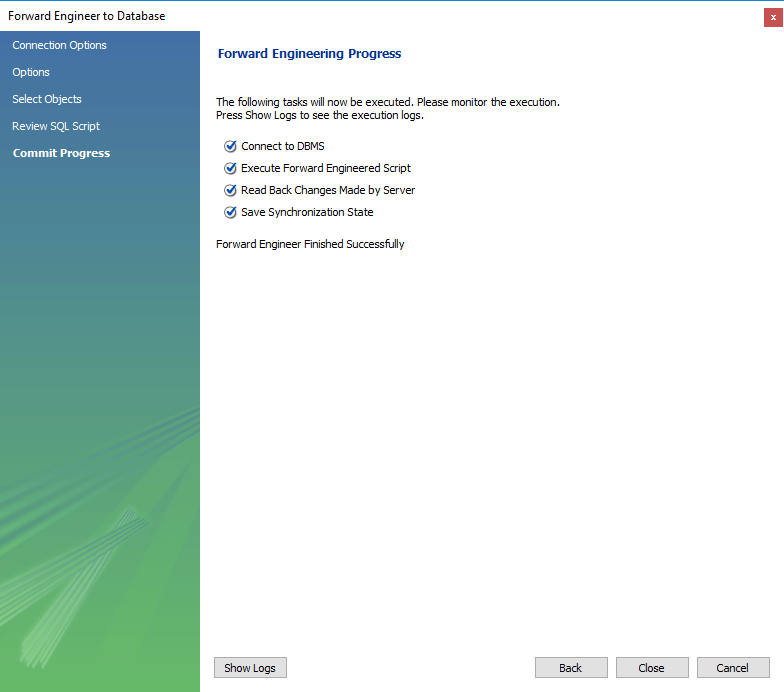 The Database along with Dummy Data is attached. We will be using this DB for all our further tutorials. Simple import the DB in MySQL Workbench to get started