ng-include in AngularJS: How to include HTML File [Example]

By default, HTML does not provide the facility to include client-side code from other files. It’s normally a good practice in any programming language to distribute functionality across various files for any application.

For example, if you had logic for numeric operations, you would normally want to have that functionality defined in one separate file. That separate file could then be re-used across multiple applications by just including that file.

This is normally the concept of Include statements which are available in programming languages such as .Net and Java.

This tutorial looks at other ways files (files which contain external HTML code) can be included in the main HTML file.

One of the most common ways is to include HTML code is via Javascript. JavaScript is a programming language which can be used to manipulate the content in an HTML page on the fly. Hence, Javascript can also be used to include code from other files.

The below steps shows how this can be accomplished.

Step1) Define a file called Sub.html and add the following code to the file.

Step 2) Create a file called Sample.html, which is your main application file and add the below code snippet.

Below are the main aspects to note about the below code,

Server Side Includes are also available for including a common piece of code throughout a site. This is normally done for including content in the below parts of an HTML document.

For a web server to recognize a Server Side Includes, the file names have special extensions. They are usually accepted by the web server such as .shtml, .stm, .shtm , .cgi.

The virtual parameter is used to specify the file (HTML page, text file, script, etc.) that needs to be included. If the web server process does not have access to read the file or execute the script, the include command will fail. The ‘virtual’ word is a keyword that is required to be placed in the include directive.

How to include HTML file in AngularJS

Angular provides the function to include the functionality from other AngularJS files by using the ng-include directive.

The primary purpose of the “ng-include directive” is used to fetch, compile and include an external HTML fragment in the main AngularJS application.

Let’s look at the below code base and explain how this can be achieved using Angular.

Step 1) let’s write the below code in a file called Table.html. This is the file which will be injected into our main application file using the ng-include directive.

The below code snippet assumes that there is a scope variable called “tutorial.” It then uses the ng-repeat directive, which goes through each topic in the “Tutorial” variable and displays the values for the ‘name’ and ‘description’ key-value pair.

Step 2) let’s write the below code in a file called Main.html. This is a simple angular.JS application which has the following aspects

In our example, the key value pairs are

The tutorial variable is also accessed in the ‘Table.html’ file.

When you execute the above code, you will get the following output. 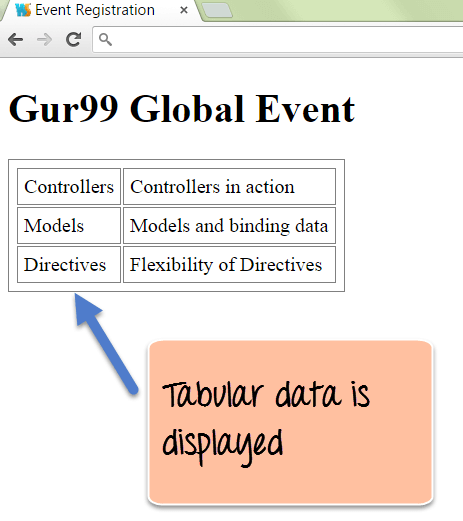