[vc_row][vc_column][vc_column_text]A module in Node.js is a logical encapsulation of code in a single unit. It’s always a good programming practice to always segregate code in such a way that makes it more manageable and maintainable for future purposes. That’s where modules in Node.js comes in action.

Since each module is an independent entity with its own encapsulated functionality, it can be managed as a separate unit of work.

What are modules in Node.js?

As stated earlier, modules in Node js are a way of encapsulating code in a separate logical unit. There are many readymade modules available in the market which can be used within Node js.

In order to use modules in a Node.js application, they first need to be installed using the Node package manager.

The below command line shows how a module “express” can be installed.

Let’s look at an example of how we can use the “require” keyword. The below “Guru99” code example shows how to use the require function

Let’s look at a simple example of how we can create our own module and include that module in our main application file. Our module will just do a simple task of adding two numbers.

Let’s follow the below steps to see how we can create modules and include them in our application.

Step 1) Create a file called “Addition.js” and include the below code. This file will contain the logic for your module.

Below is the code which would go into this file;

Now that we have created our custom module which has the functionality of adding 2 numbers. It’s now time to create an application, which will call this module.

In the next step, we will actually see how to create the application which will call our custom module.

Step 2) Create a file called “app.js,” which is your main application file and add the below code

Note: – We are not using the “Node package manager” as of yet to install our Addition.js module. This is because the module is already part of our project on the local machine. The Node package manager comes in the picture when you publish a module on the internet, which we see in the subsequent topic.

When creating modules, it is also possible to extend or inherit one module from another.

In modern-day programming, it’s quite common to build a library of common modules and then extend the functionality of these common modules if required.

Let’s look at an example of how we can extend modules in Node.js.

Step 1) Create the base module.

In our example, create a file called “Tutorial.js” and place the below code.

In this code, we are just creating a function which returns a string to the console. The string returned is “Guru99 Tutorial”.

Now that we have created our base module called Tutorial.js. It’s now time to create another module which will extend this base module.

We will explore how to do this in the next step.

Step 2) Next, we will create our extended module. Create a new file called “NodeTutorial.js” and place the below code in the file.

Note, the following key points about the above code

The above code does the following things;

Since we have executed the above app.js code using Node, we will get the following output in the console.log file

One can publish their own module to their own Github repository.

By publishing your module to a central location, you are then not burdened with having to install yourself on every machine that requires it.

Instead, you can use the install command of npm and install your published npm module.

Step 2) You need to tell your local npm installation on who you are. Which means that we need to tell npm who is the author of this module, what is the email id and any company URL, which is available which needs to be associated with this id. All of these details will be added to your npm module when it is published.

The below commands sets the name, email and URL of the author of the npm module.

Step 3) The next step is to login into npm using the credentials provided in the last step. To login, you need to use the below command

Step 4) Initialize your package – The next step is to initialize the package to create the package.json file. This can be done by issuing the below command

When you issue the above command, you will be prompted for some questions. The most important one is the version number for your module.

Step 5) Publish to GitHub – The next step is to publish your source files to GitHub. This can be done by running the below commands.

As we have seen, the “Node package manager” has the ability to manage modules, which are required by Node.js applications. 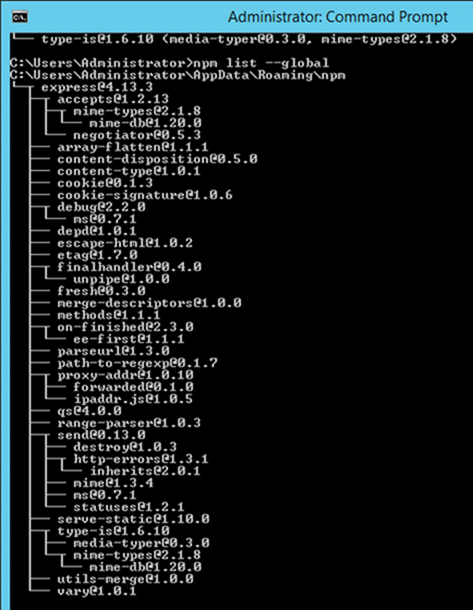 What is the package.json file

The “package.json” file is used to hold the metadata about a particular project. This information provides the Node package manager the necessary information to understand how the project should be handled along with its dependencies.

The package.json files contain information such as the project description, the version of the project in a particular distribution, license information, and configuration data.

The package.json file is normally located at the root directory of a Node.js project.

Let’s take an example of how the structure of a module looks when it is installed via npm.

The below snapshot shows the file contents of the express module when it is included in your Node.js project. From the snapshot, you can see the package.json file in the express folder. 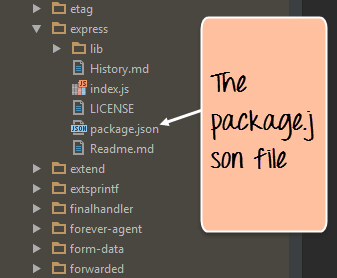 If you open the package.json file, you will see a lot of information in the file.

Below is a snapshot of a portion of the file. The express@~4.13.1 mentions the version number of the express module being used. 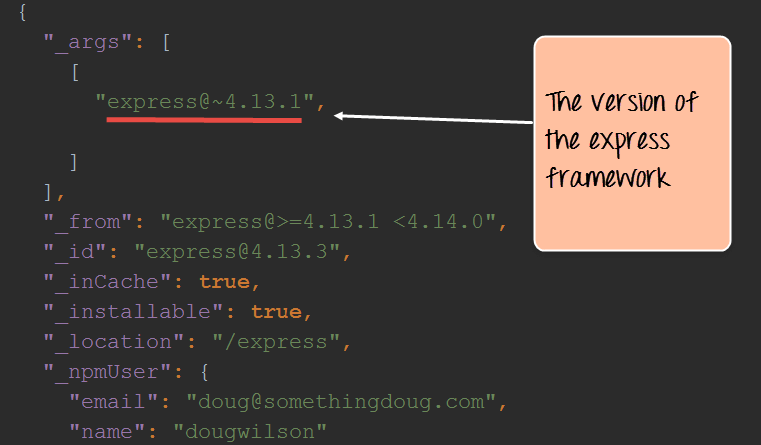