What is BULK COLLECT?

BULK COLLECT reduces context switches between SQL and PL/SQL engine and allows SQL engine to fetch the records at once.

In the above syntax, BULK COLLECT is used in collect the data from ‘SELECT’ and ‘FETCH’ statement.

In this tutorial you will learn-

The FORALL allows to perform the DML operations on data in bulk. It is similar to that of FOR loop statement except in FOR loop things happen at the record-level whereas in FORALL there is no LOOP concept. Instead the entire data present in the given range is processed at the same time.

In the above syntax, the given DML operation will be executed for the entire data that is present between lower and higher range.

The bulk collect concept loads the entire data into the target collection variable as a bulk i.e. the whole data will be populated into the collection variable in a single-go. But this is not advisable when the total record that needs to be loaded is very large, because when PL/SQL tries to load the entire data it consumes more session memory. Hence, it is always good to limit the size of this bulk collect operation.

However, this size limit can be easily achieved by introducing the ROWNUM condition in the ‘SELECT’ statement, whereas in the case of cursor this is not possible.

To overcome this Oracle has provided ‘LIMIT’ clause that defines the number of records that needs to be included in the bulk.

In the above syntax, the cursor fetch statement uses BULK COLLECT statement along with the LIMIT clause.

Example 1: In this example, we will project all the employee name from emp table using BULK COLLECT and we are also going to increase the salary of all the employees by 5000 using FORALL. 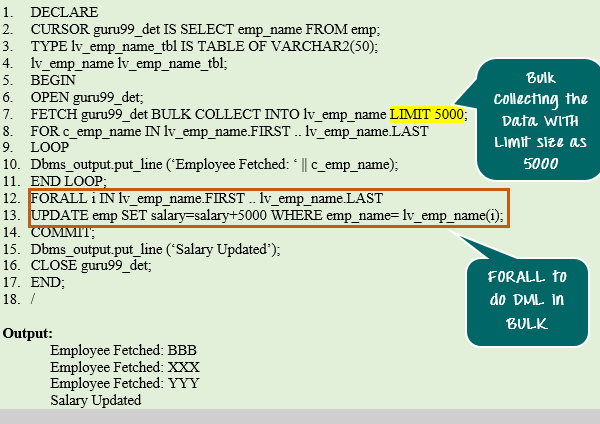