What is Exception Handling in PL/SQL?

An exception occurs when the PL/SQL engine encounters an instruction which it cannot execute due to an error that occurs at run-time. These errors will not be captured at the time of compilation and hence these needed to handle only at the run-time.

Exceptions will stop the program from executing further, so to avoid such condition, they need to be captured and handled separately. This process is called as Exception-Handling, in which the programmer handles the exception that can occur at the run time.

In this tutorial, you will learn the following topics-

The below syntax explains how to catch and handle the exception.

Note: WHEN OTHERS should always be at the last position of the sequence. The exception handling part present after WHEN OTHERS will never get executed as the control will exit from the block after executing the WHEN OTHERS.

There are two types of Exceptions in Pl/SQL.

Below are the few predefined exceptions

In Oracle, other than the above-predefined exceptions, the programmer can create their own exception and handle them. They can be created at a subprogram level in the declaration part. These exceptions are visible only in that subprogram. The exception that is defined in the package specification is public exception, and it is visible wherever the package is accessible. <

If ‘RAISE’ is used separately in the program, then it will propagate the already raised exception to the parent block. Only in exception block can be used as shown below.

Example 1: In this example, we are going to see 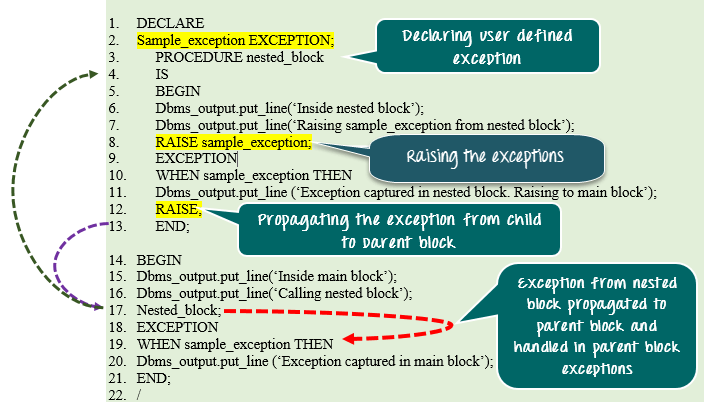 Important points to note in Exception

After this chapter. you should be able to work for the following aspects of Pl SQL exceptions