Loops allows a certain part of the code in a program to get executed for the desired number of times.

In this tutorial, we are going to see the loop concept in PL/SQL and flow of control in loops. You will learn-

The below diagram shows the looping concept in a pictorial manner 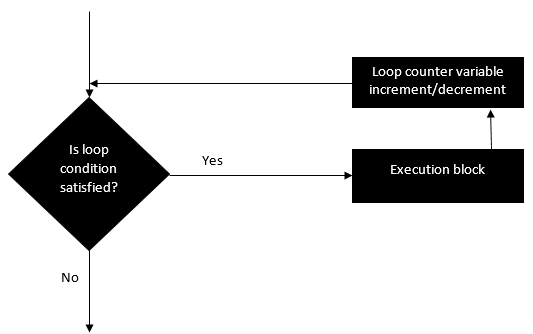 This keyword sends an instruction to the PL/SQL engine that whenever PL/SQL engine encounters this keyword, then it will immediately exit from the current loop. If the PL/SQL engine encounters the EXIT in a nested loop, then it will come out of the loop in which it has been defined, i.e. in a nested loops, giving EXIT in the inner loop will only exit the control from inner loop but not from the outer loop. ‘EXIT WHEN’ is followed by an expression which gives a Boolean result. If the result is TRUE, then the control will EXIT.

This statement will transfer the control to the labeled statement (“GOTO <label> ;”). This has the following restrictions

Usage of this statement is not recommended unless there are no other alternatives, as the code-control traceability will be very difficult in the program due to the transfer of control from one part to another part.

Types of Loop in PL/SQL

This loop statement is the simplest loop structure in PL/SQL. The execution block starts with keyword ‘LOOP’ and ends with the keyword ‘END LOOP’.

The exit condition should be given inside this execution block so that control exit from the loop.

It needs EXIT keyword to be given explicitly in the execution part to exit from the loop.

Note: Basic loop statement with no EXIT keyword will be an INFINITE-LOOP that will never stop.

Example 1: In this example, we are going to print number from 1 to 5 using basic loop statement. For that, we will execute the following code. 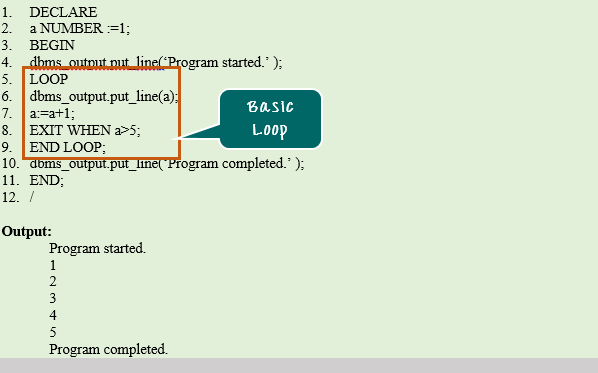 In PL/SQL, the loops can be labeled. The label should be enclosed between “<<” and “>>”. The labeling of loops particularly in nested loop codes will give more readability. The label can be given in EXIT command to exit from that particular loop. Using label, the control can be made to directly exit the outer loop of the nested loops from anyplace inside the loops, by giving the exit command followed by outer loop label.

Example 1: In this example, we are going to print number starting from 1 using Basic loop statement. Each number will be printed as many times as its value. The upper limit of the series is fixed at the program declaration part. Let us learn how we can use the label concept to achieve this. For that, we will execute the following code 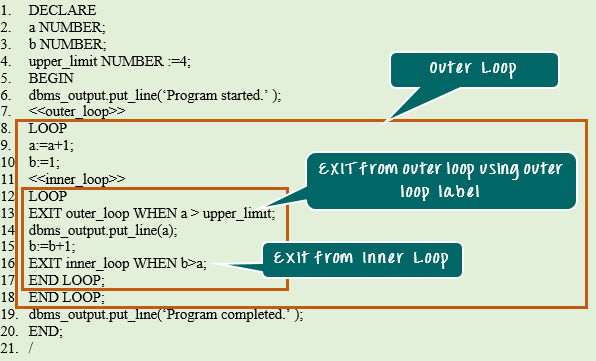