Pointers in C Programming with Examples

Pointers in C Programming with Examples

What is a Pointer?

In simple words, a pointer is an address. It is a derived data type that stores the memory address. A pointer can also be used to refer another pointer, function. A pointer can be incremented/ decremented, i.e., to point to the next/ previous memory location.

How does Pointer Work?

If we declare a variable v of type int, v will actually store a value.

v is equal to zero now.

However, each variable, apart from value, also has its address (or, simply put, where it is located in the memory). The address can be retrieved by putting an ampersand (&) before the variable name.

If you print the address of a variable on the screen, it will look like a totally random number (moreover, it can be different from run to run).

Let’s try this in practice. 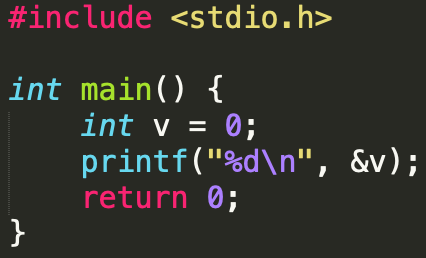 Now, what is a pointer? Instead of storing a value, a pointer will y store the address of a variable.

Like variables, pointers have to be declared before they can be used in your program. Pointers can be named anything you want as long as they obey C’s naming rules. A pointer declaration has the following form.

After declaring a pointer, we initialize it like standard variables with a variable address. If pointers are not uninitialized and used in the program, the results are unpredictable and potentially disastrous.

To get the address of a variable, we use the ampersand (&)operator, placed before the name of a variable whose address we need. Pointer initialization is done with the following syntax.

A simple program for pointer illustration is given below:

Types of a pointer

We can create a null pointer by assigning null value during the pointer declaration. This method is useful when you do not have any address assigned to the pointer. A null pointer always contains value 0.

Following program illustrates the use of a null pointer:

In C programming, a void pointer is also called as a generic pointer. It does not have any standard data type. A void pointer is created by using the keyword void. It can be used to store an address of any variable.

Following program illustrates the use of a void pointer:

A pointer is said to be a wild pointer if it is not being initialized to anything. These types of pointers are not efficient because they may point to some unknown memory location which may cause problems in our program and it may lead to crashing of the program. One should always be careful while working with wild pointers.

Following program illustrates the use of wild pointer:

Other types of pointers in ‘c’ are as follows:

Let’s understand this with the help of program below

After compiling the program without any errors, the result is:

The pointer operations are summarized in the following figure

When working with pointers, we must observe the following priority rules:

If a P pointer points to an X variable, then * P can be used wherever X can be written.

The following expressions are equivalent:

In the latter case, parentheses are needed: as the unary operators * and ++ are evaluated from right to left, without the parentheses the pointer P would be incremented, not the object on which P points.

Traditionally, we access the array elements using its index, but this method can be eliminated by using pointers. Pointers make it easy to access each array element.

Adding a particular number to a pointer will move the pointer location to the value obtained by an addition operation. Suppose p is a pointer that currently points to the memory location 0 if we perform following addition operation, p+1 then it will execute in this manner:

Since p currently points to the location 0 after adding 1, the value will become 1, and hence the pointer will point to the memory location 1.

A string is an array of char objects, ending with a null character ‘\ 0’. We can manipulate strings using pointers. Here is an example that explains this section

Another way to deal strings is with an array of pointers like in the following program: