Modern day business applications use variety of programming platforms to develop web-based applications. Some applications may be developed in Java, others in .Net, while some other in Angular JS, Node.js, etc.

Most often than not, these heterogeneous applications need some sort of communication to happen between them. Since they are built using different development languages, it becomes really difficult to ensure accurate communication between applications.

Here is where web services come in. Web services provide a common platform that allows multiple applications built on various programming languages to have the ability to communicate with each other.

In this introductory tutorial, we will explain more about what web services are about, the different elements which constitute web services, and a little bit about SOA (Service Oriented Architecture) principles.

What is Web Service?

Web service is a standardized medium to propagate communication between the client and server applications on the World Wide Web.

A web service is a software module which is designed to perform a certain set of tasks.

The above diagram shows a very simplistic view of how a web service would actually work. The client would invoke a series of web service calls via requests to a server which would host the actual web service.

These requests are made through what is known as remote procedure calls. Remote Procedure Calls(RPC) are calls made to methods which are hosted by the relevant web service.

As an example, Amazon provides a web service that provides prices for products sold online via amazon.com. The front end or presentation layer can be in .Net or Java but either programming language would have the ability to communicate with the web service.

The main component of a web service is the data which is transferred between the client and the server, and that is XML. XML (Extensible markup language) is a counterpart to HTML and easy to understand the intermediate language that is understood by many programming languages.

There are mainly two types of web services.

In order for a web service to be fully functional, there are certain components that need to be in place. These components need to be present irrespective of whatever development language is used for programming the web service.

Let’s look at these components in more detail.

SOAP is known as a transport-independent messaging protocol. SOAP is based on transferring XML data as SOAP Messages. Each message has something which is known as an XML document. Only the structure of the XML document follows a specific pattern, but not the content. The best part of Web services and SOAP is that its all sent via HTTP, which is the standard web protocol.

Here is what a SOAP message consists of

The diagram below shows a simple example of the communication via SOAP. 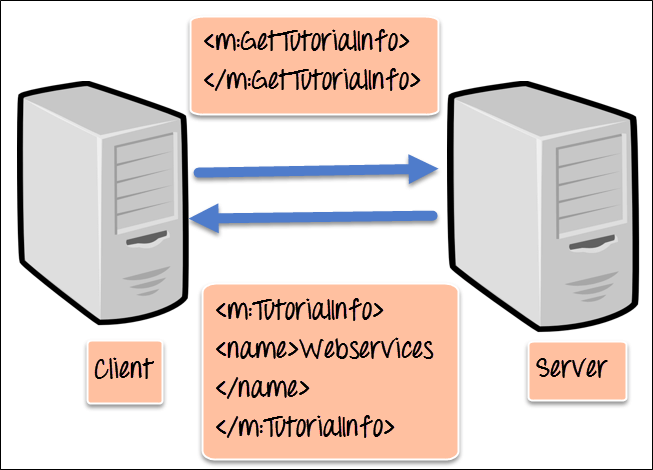 We will discuss SOAP in detail in this tutorial.

An example of a WSDL file is given below.

The important aspects to note about the above WSDL declaration are as follows;

We will discuss “WDSL” in detail in this tutorial.

UDDI is a standard for describing, publishing, and discovering the web services that are provided by a particular service provider. It provides a specification which helps in hosting the information on web services.

Now we discussed in the previous topic about WSDL and how it contains information on what the Web service actually does. But how can a client application locate a WSDL file to understand the various operations offered by a web service? So UDDI is the answer to this and provides a repository on which WSDL files can be hosted. So the client application will have complete access to the UDDI, which acts as a database containing all the WSDL files.

Just as a telephone directory has the name, address and telephone number of a particular person, the same way the UDDI registry will have the relevant information for the web service. So that a client application knows, where it can be found.

We already understand why web services came about in the first place, which was to provide a platform which could allow different applications to talk to each other.

But let’s look at some other advantages of why it is important to use web services.

Every framework needs some sort of architecture to make sure the entire framework works as desired. Similarly, in web services, there is an architecture which consists of three distinct roles as given below 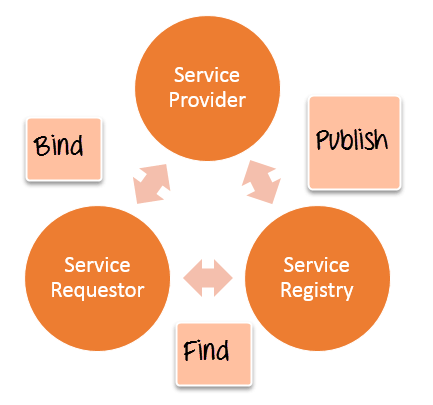